It is a beautiful thing that the Yukon Film Society was able to bring us “Tree of Life” through their new Available Light Cinema incarnation at the Yukon Arts Centre once a month.  Even more amazing was the swiftness.  Whitehorse is not known as the place where new good films come quickly–but the YFS have almost bridged the gap between us and Seattle.  Tree of Life was handed the Palme D’Or in May, and we have it in September.  I’d say that was pretty darn fast. It shows again on Wednesday night, Sept 14 at the Yukon Arts Centre. 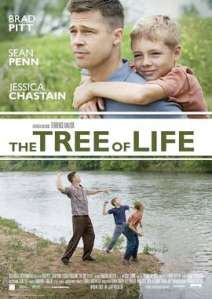 The Tree of Life is many things to many people.  The film doesn’t concern itself with a complicated, or even clear, narrative.  It has a simple one.  At the opening of the film, the death of brother/son sends the characters reeling.   What follows is a montage of scenes recalled from the mind of a surviving brother, now grown up (Sean Penn) as he tries to figure out what happened to “allow” this death in God’s great scheme of things.  The Tree of Life, for me, was a calling out, a plea, a requiem to God for our personal tragedies–asking many times of God, Where were you?  Why did you let this person die?  Was he a bad person?  The film is loosely tied together with scenes from a Texas childhood–a paradise of sorts–with a scary center, a frustrated musician father (Brad Pitt) who takes out his anger, at having to put away his music, on his three boys.

There’s a lot of whispering in this movie.  Be careful when you cough.  You’ll miss them.  Often the whispered pleas begin with “Father” or “Mother” or “You”— as the man, who speaks as the boy, tries to figure out whether he was more worthy of death than his brother.

God appears in this movie, but not as Christians typically think of him–he is a bit distant, but consistent with the book of Job.  There is the other “Where were you?” to consider:  the movie opens with an epigraph from Job, asking Job–in the voice of God–“where were you when I created the heavens and the earth?”  And there is stunning cinematography that takes a viewer from the beginnings of creation through to the moment the son is born.   Through this, the pleas and the questions cry out— “God, are you there?” plays over a volcanic planet being birthed.  The magnitude of the event of creation overshadows the magnitude of the personal tragedy.  It is almost as if Malick is answering for God: I was worried about much larger things.

But to make that the only statement Malick makes would be to miss his emphasis on the importance of love and forgiveness in the face of the cruelties of life and death.

The mother (Jessica Chastain) tells us that there are two paths in life–the path of nature and the path of grace–and that she is going to try her best to live by the path of grace, of always giving the benefit of the doubt, of learning from others, of accepting and enjoying others, and the moment.  The path of nature, she says, is selfish.  It is her path of grace that gives a heart to Sean Penn’s childhood–a magical quality that shields him, partly, from the more cruel aspects of life.  His father, I’m afraid, chose a different path, for believable reasons and has so much taken from him that it slowly eats him–and his children, rather than being his art, become those things that echo the cruelty of his life back to him, the lack of respect, the loss of control. Her path is challenged though with the death of her son–it doesn’t add up why the path of Grace should have tragedy happen to it too.

There is grace in the film, I think.  In Penn’s looking backwards, as he wonders why his own “sins” were overlooked, and why his brother’s sensitivity and bravery seemed unconsidered in God’s decision to take him, we see Penn come to terms with the twists and turns of life—amoral in their happenings.  Humans have to provide the compassion and the grace because life doesn’t give it.  Or does it?  And is God responsible for every life taken–is there some accounting of God that must be done for every one of life’s cruel moments?  Is he responsible only for the tragedies–the famines, the floods, the tsunamis, the earthquakes? Is he not also the one who gives us such beautiful moments too–and can you accept the beautiful moments without also accepting the ugly ones?

These are the questions Job struggles with as he loses his whole family at the beginning of his book, Job.  Did I do something wrong?  Job knows that he has not.  But then why has life been so utterly cruel to him?  He doesn’t understand.  And neither do the characters in this film–they wander around trying to piece together who’s at fault.  And the filmmaker takes us through a catalogue of beautiful summer days showing us the characters interacting in scenes that seem not to connect to each other except that these are moments they go through together as a family.

I thought this was a beautiful contemplation on life.  The Tree of Life gave out eternity in the garden.  Adam and Eve miss eating of that tree–instead only eating of the Tree of Knowledge.  The Tree of Life is then quickly sequestered away as Adam and Eve are thrown from the garden–with God heaving a sigh of relief that Man never ate of that tree, lest he be eternal and sinful.  I think these summer childhood moments are a garden that the oldest boy ruminates on, investigates, replays, so that he can find what moment sent R.L. to his death.

I think this movie shows a really unique narrative structure too.  It’s unusual to see such a loose narrative that relies so much on an audience to piece it together–or not.  We don’t have to all piece it together the same–Malick is less concerned with the specifics of these characters than he is about making them represent humankind, family, us.

After the film was over, there was healthy discussion in the parking lot under the northern lights about the nature of the film, of God, of the messages that Malick was giving, and of the stunning scenes and pictures of creation.  I have never seen creation done so well–of course it is creation as evolution, a combination which doesn’t need to eliminate either option, but which works them both together.  It is grace that we developed on Earth, grace that God created it in the first place, and grace that God provides us the consolation of forgiveness–a power that we bestow on each other every day.

The Tree of Life plays Wednesday, September 14, 7:30 at the Yukon Arts Centre.

For another review of the film, consider this one from the New Yorker.