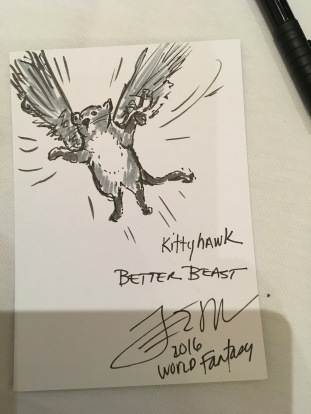 When I went to World Fantasy in Columbus, Ohio, we debuted my book, The Angels of Our Better Beasts, and as a bonus, I offered to draw a free beast of your own creation.  Many people took me up on that!   They described to me beasts and I drew them, and here are some of those beasts.  If I drew a beast for you and it isn’t present, it could be because I didn’t have a photo of it, but if you send it, I will add it to the collection of beasts.

What I learned: that we all have a favorite creature–and that we have imagined them before.  Very few of you made up something on the spot.  You were ready.  You had a Beast in Mind.  As part of our childhood, as part of our parenting, or as just something we’ve longed to see as real.  At different times as a child, I used to walk around with an invisible Pegasus, an invisible Lassie, and I can’t tell you too much more about the werewolf I thought would come for me when I was a teen–except that he was there, on the fringes of my consciousness.  I was a creative kid.  You are too.  Your beasts travel with you.

There is nothing to be ashamed of in having your Beasts.  They are often playful, sometimes scary.  But the scary ones even bring a smile to people’s faces, as if the very badass-ness of the Beast they’ve created is wonderful.

I know one man, Alex, said that he created Uber-Corgi for his son, and that they told stories of Uber-Corgi.  Maybe you’ve made up a beast for your kids too…

Most of the beasts were Whimsical which I guess means that we see furry creatures as part of a fantasy, not a horror.  I know online RPGs enjoy giving you “pets” of exotic beasts and people love collecting those.

I’m glad I could be a part of making your beast come to life! 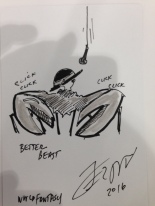 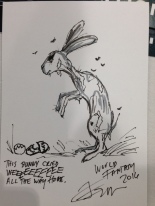 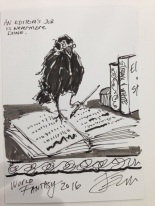 So if you have a beast not pictured here, and you send me the picture of it, I’ll add it here.

I know we did about 25-30 beasts in Columbus, about ten in Toronto (one I can’t put online–you know why, Stephen!). I didn’t have a chance to capture them all–but maybe you know where the fantastic beasts are and where to find them… hehe…

Just a note: I’m not running the free beast with a book program right now.  All of you I’ve promised a beast to are still getting one, if you don’t have it already… but it was a great promotion for the launch and for the Toronto Launch too.

I will start this up as a promo later in the year with ChiZine again so watch for the chance to get your Beast realized.  Until then, please enjoy these beasts!  And let me know where to find the rest!