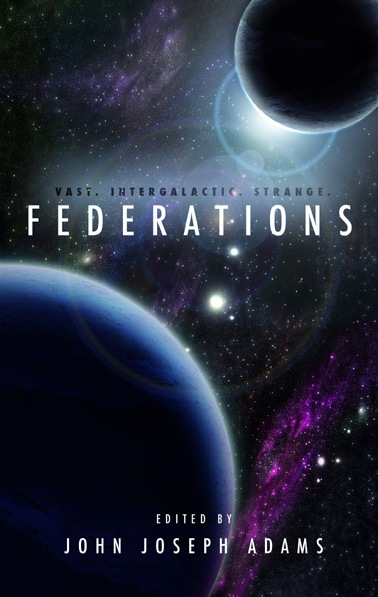 All right, Science Fiction Writers, you have another cool opportunity for publication. Remember back when you and me were discussing writing for Star Trek? Well, John Joseph Adams, editor of this year’s fun anthology of zombie stories, The Living Dead, (which has a great story from my BFF Catherine Cheek) is looking for stories about the impacts of far-flung galactic empires in a new anthology called Federations. I quote from his guidelines:

What are the social, religious, environmental, or technological implications of living in such a vast society? What happens when expansionist tendencies on a galactic scale come into conflict with the indigenous peoples of other planets, of other races? And what of the issue of communicating across such distances, or the problems caused by relativistic travel? These are just some of the questions and issues that the stories in Federations will take on.

So, if you have an idea you’d like to explore in an intergalactic empire sort of way, in 5000 words or less, submit it to Adams by Jan 1 2009. We may not get to write for Star Trek, but we can write out our Trek-like visions and still discuss the same issues in this anthology–and that may be a better thing than boldly going into Roddenberry’s universe. We get a universe of our own to play with.

One thought on “New Market: Federations Anthology–Get your Star Trek on!”