Definitely Not the Opera, (DNTO) a CBC Radio One program devoted to the art of storytelling in Canada, asked me to tell my story of coming out to my church for their Nov 3 show “Lost Causes”.

I had pitched the idea to them last year for a different show called “Making Enemies” but withdrew the pitch because a) I don’t think I meant to make enemies, nor do I think I have made enemies; and 2) because I didn’t want to restir a pot that has finally calmed down.

But they remembered my pitch.  And they sought me out.  Which is humbling, and cool.  We recorded on Friday morning and they are editing my lengthy story to 3-4 minutes.  I appreciate Andrew Friesen’s belief that my story was important and needed to be told.  I feel like the story is more appropriate under “Lost Causes” because trying to reason with people who don’t want to listen to you, or discuss with you–and believing that you alone have to spark change–well, it can feel like a “Lost Cause”.  But in the end–and the end hasn’t come yet–who knows if the cause is lost?  I think every person who says the church must look at the evidence, must consider the Christian testimonies of LGBT folks in the discussion, is a step towards change.  We need more people who realize how many people have fallen away from the faith, have decided against Christ, have been repelled from the church, and who, sometimes when there is no hope left, taken their own lives, all because the Church has historically refused to consider the scriptures in an accepting light–and this causes their members to refuse to accept their children in an accepting light.  This splits familes.  My God and my Christ are not what I encounter when I come into a Baptist Church anymore.  I daresay they wouldn’t recognize it.  Churches are not all one defined Mass though–as many churches are beginning to change their minds about LGBT people.  Episcopals, Lutherans, Presbyterians, United Church of Canada–all have begun seeing that this is just the next issue the church has to rethink.  As it did slavery, race, and its treatment of Women.  And divorce.  Change comes when people inside churches decide they can’t hold false doctrine anymore.  Christianity and Faith are not the problem.  Interpretation is.

END_OF_DOCUMENT_TOKEN_TO_BE_REPLACED 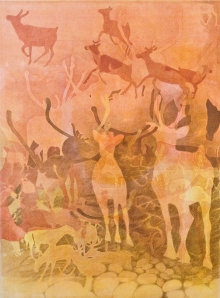 We hear a lot about the future of New York, of San Francisco, of England.  Ever wondered what the NORTH would look like in 50 years? What would be happening, what kinds of trends here in the Yukon?  What kinds of possibilities?  Is it all going to be dark from climate change, or will we adapt as we go? I think it’s going to be a good Future if we can take better care of the Now.

Three years ago I created a five part series called “Yukon 2058” for the 50th anniversary of CBC.  They wanted something that celebrated their first 50 years, so I offered them a look at the next 50 years.  My theme was to eventually come back to why CBC is important, why local programming trumps National programming, why having a large staff in a small place like the Yukon is important.  I tried weave my opinions about what is good about CBC, and what is bad about the trends happening to CBC, into a narrative.  Yukon 2058 is the result.  5 parts.  The narrative of a CBC reporter wondering what his future will be, trying to find where he belongs in a rapidly competitive market.

You can go to the Radio Series page and look under YUKON 2058.

*image is Joyce Majiski’s “Racing Uphill.”  See more of her work on her website.

As I’m approaching an inevitable embrace of Canada (oh, sweet mystery of life at last I’ve found you!) I’m aware that I have very little knowledge of the Canadian literary tradition.   A poor citizen is one who does not know his country’s stories. It is how we speak to one another–a cultural physiography and language that connects Canadians together.  How can I become a citizen without learning this cultural language?   I thought a more creative way would be for Yukoners to suggest Canadian books that meant something to them–then it would be more personal.

So I went on CBC with Dave White and we came up with a plan for book suggestions–a reading list of sorts–so that I could become more literate about Canada.  We are getting great results, but please call in to Dave and suggest more books.  I’d like to build a canon, of sorts, of Yukon-suggested Canadian literature.  Right now I’m looking mostly for fiction, poetry and drama—but creative nonfiction would be appropriate too.  I built a blog to read and discuss this literature.  It’s called “A Year of Canadian Reading” and you can follow the link to see what I’m reading, what I’m up to, and what I thought about books you suggested.  Follow along if you like.  Read them with me.  I want to get an idea about Canada from its literature.  I want to understand you through your stories.

I don’t have any intention of stopping reading after the Year is over—but an actual year is a start.  I’ve read some Canadian Literature–Mordecai Richler, Al Purdy, Tomson Highway, Alistair MacLeod, Alice Munro, Margaret Atwood and Michael Ondaatje (as well as some great science fiction and fantasy).  But I’m aiming for a deeper understanding of Canada through breadth and depth of your suggestions.

Monday, the day the US celebrates Martin Luther King, Jr. day, there will be a special segment highlighting MLK’s conversation with Nichelle Nichols, the actress who played Lt. Uhura in Star Trek for both the first series and a majority of the movies.  While Trek fans are familiar with the story, most people aren’t aware that Nichols almost left the show after the first season.  She was tired of her very limited role on the series and wanted to return to the musical stage.

King said something very profound to her and I’d like to just comment on it.  When Nichols met King, he told her that he was a fan of the show.  When she said she was thinking about leaving the show, he had this to say:

Star Trek creator Gene Roddenberry, Nichols says King told her, was showing the nation a universe where  “‘for the first time, we [African-Americans] are being seen the world over … as we should be seen’.” And ” ‘you have created a character’ ” that is critical to that, he said.

King’s assertion that imagining a future, even in fiction, was powerful enough to create that future is a concept Science Fiction writers need to take to heart. If they see it, they can make it happen.  Yes, we made cell-phones to look like Trek communicators, and named our shuttle after the Enterprise, but more importantly, we modeled peaceful relationships with different races and different nationalities.  We saw Russians, Japanese, Scottish, American midwest, American Southern, Vulcan, and African-American all working together as a team.  King thought that this image of peace was as important as the peace itself–and that an image could lead us there.  It’s natural to imagine dystopia after dystopia, and even, sadly, Star Trek, seems to mess with every Utopia it showcases.  But I think we can imagine a better place, a better us.

Writers have the ability to model the future we want.  While stories must have conflict, we can guide people towards something positive by helping them imagine it.  Blueprinting.  King thought we could too.  And his inspirational talk with Nichols kept her on the show at a time when we needed to see that we could work together.  (I wish someone would design a show with an American and North Korean working side by side.)

You can hear snippets of Nichols’ interview with NPR on their site, and listen in Monday, on the show Tell Me More.  The link has listening times. 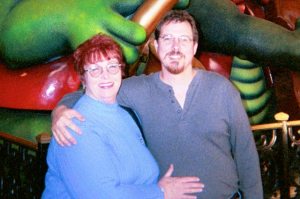 Hi Folks, if you look under Radio Series, you’ll see I finally put up the 5 parts of “Adopting my Mother.”  It was my first radio series.  Be kind.  I had a lot of fun with it, but it was my first foray into radio series.  It tells the story of when my birthmother found me, when I was 30.  What follows is me getting used to having another mother, or trying to figure out how to fit in a person into my life who had a very important role in creating me.  It’s not easy adopting a new person into your life–when you have a mom, a happy life, and you think you really don’t have to know where you came from or your own history….

But it’s interesting how much that beckons when you’ve never really known where you came from….. or why….

And suddenly here’s someone who can tell you everything…  and they’re only an email away.

Come listen to “Adopting My Mother” on the Radio Series page. 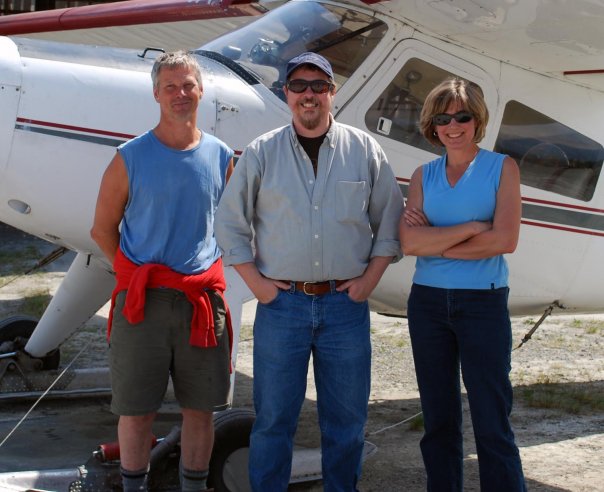 I did a nine part radio series on research and science out at the Kluane Lake Research Station this Summer.  It was under the auspices of the International Polar Year and the Arctic Institute of North America (AINA).  AINA and Ruth Klinkhammer did a great job at compiling and showcasing my work at the Station and they set up a page of my radio series.

If you’d like to listen to some of the fun that I had this summer with the gang at KLRS, stop by this website and check out the broadcasts.

Who’d have thought they’d hire a science fiction writer to write about real science?  It taught me a lot, though.  And what I learned there will stick with me for a long time. 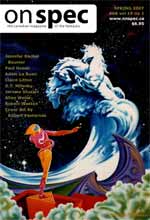 Hey, you can hear me reading from my science fiction story, “Why the Poets were Banned from the City” online at On Spec: Follow this link here.

It originally appeared in the Spring 2007 issue that you see on the left. What I loved about the cover art by Robert Pasternak is that it is a wave of white horses, exactly how Whitehorse was named (for the rapids and their uncanny resemblance to white horses). It was a nice piece of synchronicity for me as a writer.

The piece is only 5 minutes long, but you can read the rest in the Spring 2007 back issue.

Much gratitude to Diane Walton and Colin Lynch of On Spec for asking me to do it. And for a great friend who helped me record it. Thanks!

On Spec is dedicated to publishing Canadian Speculative Fiction and is always looking for more. Hop around on their website this holiday and see what they’ve got.

Hey folks, just placed the first three episodes of Leaving America, my radio series about my immigration journey, up on the site–as its own page.  I’m sorry you have to click on two separate pages–but I’m not as familiar with WordPress as I’d like to be.  Still, I’m very happy that the files are up somewhere.

Hope you enjoy them.  I will put up a page for Yukon 2058 as soon as the series is done on CBC.  They will not be putting them online, so I can place them here for those who missed episodes.

Thanks for your encouragement and kind words.