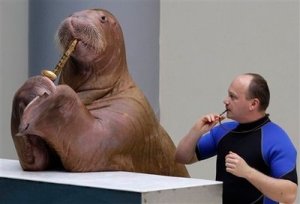 I confessed to a fellow writer that I had nine jobs in the Yukon, and that it was still sometimes make or break at the beginning of each month.  I was living by cobbling together jobs, which isn’t necessarily bad. In my case, I might not get to do everything I want at first–but learning to diversify has helped me survive.

I’d always thought I would rather live by the phrase: I’m a ________ who also writes. Fill in the blank with astronaut, beekeeper, mechanic, sumo wrestler, whatever you like. This is where my money would come from–then I would carve out writing time. Or, another option was: I married a _______ and I write. Fill in the blank with astronaut, beekeeper, fire swallower, accountant, President, Estate owner, whatever you want. [On second thought, hold off on the fire swallower] Either way, money would come into my house steadily. I like paying my bills, really. 😀 But these options come with their own heartaches, as I’ve been reminded of by a good friend who struggles with the full time job and not having time for art. I would say it’s a choice–this art or security–but I want to believe we don’t have to make that choice.

Some say “the lean and hungry look” is a good one for writers–makes you write more, and more brilliantly. But lack of security makes me frightened, cranky, and depressed, and angry at myself for not planning better, or getting marketable skills. My brain panics and I make endless lists on how I can make money—that’s not what I would call “creative writing”–it is Fear.  You don’t get paid from writing for months, so it’s never fast money. So, the answer I came up with –if I couldn’t get a big job that paid well–was to diversify.

Here’s my version of diversification to make ends meet: I teach one college class on novel writing, teach cartooning in the schools through Yukon Arts Edventures, teach an after school program for teens through the City of Whitehorse on writing science fiction and fantasy, write articles for Yukon: North of Ordinary, sometimes for What’s Up Yukon, work as an on-call interpreter for the Beringia Centre, am doing an Oral History project for a friend, perform vaudeville in the summer, write radio series for CBC. In the works: I have auditioned for some short movies as an actor, may be working on an ad campaign, am auditioning to sing in a Big Band and am trying to teach online, and teach through teleconference, in the summer.

Even with all these small jobs, I’m still doing what I love:

Of my  jobs, most of them can be connected to narrative in some way. I write articles on topics that both interest me, and might be used for later stories; I teach about writing or literature; the radio series lets me both write, perform and produce; cartooning in the schools has expanded my understanding of narrative. The performance jobs–including Beringia as an interpreter–are still about words, communication, entertainment, teaching. So, in reality, I haven’t strayed too far from my writing, or my degrees.

And–working outside my field has improved my writing by showing me different styles of writing: a more informative style (articles and Beringia) and comedic (vaudeville and comic strip), for example–and by giving me new subjects to write about–like mammoths and scimitar cats and Yukon history and fifth graders. Also, it’s given me several editors–newspaper, magazine, online editors.

My friend, Arlin McFarlane, is a professional at diversifying. Actor, producer, director, B & B owner, acting teacher, English teacher, creator of Burning Away the Winter Blues and other creative events in Whitehorse, Arlin calls it repackaging yourself for every new job–the money I make she calls “ribbons of income.” It’s what we do to survive as Creators. I’d say that diversifying is more than a survival technique, it is a way of expanding your understanding of your skills. What CAN you do? A host of things. They may not pay much at first, but they keep you creating.

I had to give writing its own place in my job line up too.  If I didn’t, then job number 10 or 11 could sweep away the writing.  Until you find a sustaining job –that also gives you time and support to create–diversify to keep your name out there, your skills fresh, and your money coming in.   If a Walrus can play a saxophone to make a living, you can discover new ways to make your bucket of fish too.

PS. While I was writing this, the phone company called to remind me my bill is overdue. Sigh. Ars longa, bills brevis.