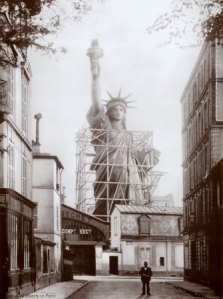 My story, “One Nation Under Gods,” was selected to be part of the Canadian Science Fiction and Fantasy anthology, Tesseracts 14, edited by Brett Savory and John Robert Colombo, due out in September 2010.  The Tesseracts series is devoted to Canadian Science Fiction and Fantasy and Horror, and has had, as you might have guessed, 14 other volumes (a Tesseracts Q was for Quebec, and the requisite 1-13 which came before).

You might have caught me reading a portion of this at the Yukon Writers Festival a couple of years back.  It involves two kids and a history test, and a complete restructuring of the United States based on values Americans, like me, hold sacred: patriotism, freedom, the just war, independence, religion.  I just personified them a bit.  I’m very pleased it found a home.  I’m now going to start work on the novel version of this story.

The picture on the left is the construction of the Statue of Liberty, a figure which looms large on the landscape at the beginning of my story.  And as I was now an immigrant to Canada, the Statue of Liberty loomed large on my new immigrant’s mind…what a dramatic beginning to a new life for those coming to America.  For me, I saw her on my way out.  On my drive from Texas to the Yukon, I parked my red truck in Calgary for one month, flew to Vermont to be part of a writer’s colony, and in that time, snuck down to see her.  Like some mistress I was breaking up with.

How do you explain to her that you are leaving?

I put her in my story, though, and so in this way, she haunts me.