Moon Over Manifest, the debut novel by Clare Vanderpool, just won the Newbery Medal.  According to the website for Newbery, “[the medal] is awarded annually by the Association for Library Service to Children, a division of the American Library Association, to the author of the most distinguished contribution to American literature for children.”

From the description on Clare’s site about the book:

Eleven-year-old Abilene Tucker, the only daughter of a drifter, and therefore a drifter in her own right, has just arrived in Manifest, Kansas during the Depression while her father works a railroad job back in Iowa.  Having heard her father, Gideon’s stories of the town in its 1918 hey-day, Abilene looks for the sign with big blue letters but finds the sign shot up so bad, all that was left read: “Manifest – A town with a past.”   She is disappointed to find that Manifest is just dingy and dried up like most other towns.  But her disappointment quickly turns to intrigue when she discovers a hidden cigar box that contains old letters, a collection of mementos, and mention of a spy known as The Rattler.

Abilene and her friends, Lettie and Ruthanne, embark on an honest to goodness spyhunt that ends up with someone leaving a note on their treehouse cautioning them to Leave Well Enough Alone.  But Abilene sets caution aside when she ventures down the mysterious Path to Perdition and ends up at Miss Sadie’s Divining Parlor.  Abilene isn’t sure if the Hungarian woman is really a diviner or just an old woman who tells stories of the past.  But through Miss Sadie’s stories, Abilene searches for the boy her father once was and the meaning of home.

Clare is a mother of four children.  The book took five years to write, and now she’s in the New York Times talking about it.

“Ms. Vanderpool, the Newbery winner, said she wrote “Moon Over Manifest” over five years, beginning in 2001, stealing bits of time while raising her four children.

“I would write during nap times, during ‘Sesame Street,’ that kind of stuff,” said Ms. Vanderpool, 46, by telephone from her home in Wichita, Kan., where she was born and reared. “It was just a nice little escape, a nice hobby. Then fortunately this year it got published.”

This particular Newbery winner means a lot to me because Clare is my friend.

I told Clare that I’d be cashing in all my “I knew her when” chips now!   Here I was scanning the New York Times and saw that the Newbery Medal was out, and WHOP!  I jumped up from the couch and said, “The NEWBERY!  SHE WON THE NEWBERY!!”

I met Clare at the Milton Center writing workshops sponsored by Newman College, now Newman University, back in 1996.   We were both working on novels and just trying to find their directions.  The workshop was made up of teachers and area writers, usually a buttload of journalists, me the science fiction writer, and Clare, one of two children’s writers.  Everyone worked on some writing project and I think we looked at one or two works a week.  She was working on a novel set in Ireland.  She loved kids’ books.  I remember her bringing in this book about a boy wizard and saying, “This is really, really good.”  She was into Rowling before any of us knew who Rowling was.  She knew it would go places.

There’s a bookstore, Watermark Books, on the East side of Wichita that she and I would go to and chat and have coffee.  They serve sandwiches and coffee, and you can walk into the bookstore and browse around.  We were in a young adult book club and each got to choose a book for the others to read.  She made me read a kid’s novel about Poland–The Trumpeter of Krakow.  It was the 1929 Newberry Award winner.  I don’t remember what I made her read, but I liked the Trumpeter of Krakow.

We traded chapters of our novels back and forth and she read and critiqued my chapters about talking polar bears in West Texas (she was very open-minded), and I hers about Ireland.  I left Wichita in 1999.  I don’t doubt that the novel she worked on then will be published one day too.  I value her as a friend and critic.  She saw what my chapters needed.  And she was thorough.  And she always told me what her reading experience was like when she read my chapter.

I saw her again when I went through Wichita on my way up to Canada to settle in 2007.  We had coffee and we talked about everything that had happened since we last saw each other, sitting outside at a table at Watermark.   I’d come out to her–only a few people at that time knew.  She was encouraging.  She called me once here in Whitehorse to tell me that she’d sold her book to Random House, and she sent me a beautiful postcard of the October book launch, “not that I’m expecting you to make it–it’s a long way.”  She held it in Watermark Books, where we used to read other people’s cool books.  I sent an email the night of the launch, the best I could do.  (Must work on teleportation device this month…)

It’s wonderful that Clare won the 2011 Newbery Medal.  She’s an awesome writer and a great ambassador for Newbery.  Newberys get read in schools.  I remember lots of Newbery books growing up because our teachers read them out loud to us.  In fact, libraries had bookmarks with the Newberys from every year on them.

Some of these books were my FAVORITE books growing up:  Mrs. Frisby and the Rats of NIMH, Bridge to Terabithia, Jacob Have I Loved, The Door in the Wall, The High King, The Giver, A Wrinkle in Time, Julie of the Wolves, The Witch of Blackbird Pond, Rabbit Hill, and the Voyages of Doctor Dolittle.  And now one of my favorite people, and good friends, gets to be placed at the TOP of that list of great books. 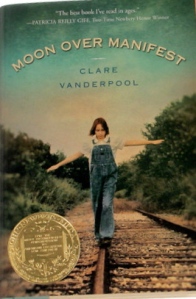 Congratulations, Clare!  While raising four kids, you wrote, and you stayed writing, and you stuck it out.  You started one novel and you wrote for five years, and then tried to get it published and it took you four more years.  Today, for that hard work, you are this year’s most “distinguished contribution to American literature for children.”  Ain’t that a hoot!

Schools will be reading you.  Mothers and book clubs this year will be sitting around talking about your book, and maybe, when their kids are napping, they’ll be tapping away at a sweet novel of their own.

For more about Moon Over Manifest, visit Clare’s site (if you go soon, you’ll catch her before she puts up the Newbery!)