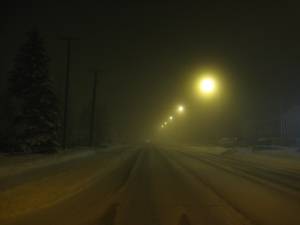 Just a reality of living in the north, these -40 nights, where the icefog and the woodsmoke turned back on the streets mingle together to hide the city.  It’s mysterious and lovely.  Dangerous to drive in.  I couldn’t see the next segment until it was revealed.  People crossed second street without tapping the crossing light button and I could barely make out their dark forms merging back in with the night.  It was like there was a wall at the back of every backdrop setting— here’s Main Street with nothing beyond it but a white wall, and now the Library and now the Bridge.  Like curtains being opened one after the other, presenting our town in segments.  It certainly robs the city of continuity, or of flow, but it really makes you think of the city in sections—as if Main street were all by itself, or the Bridge, somewhere in England, instead of Canada, the fog so thick you couldn’t tell where it was placed in the geography.

I wished I’d had my camera the whole time, but it was hard enough driving your truck through the

fog.  It groaned and squeaked as if it were thirty years old instead of five.  My friend says she won’t drive after it dips below -35C.  “Everything on your car breaks.”  And I saw, like an ambulance for vehicles, five or six tow trucks dragging perfectly good-looking cars and SUVs–just reminding me that even good cars in bad weather can break.  The air is filled with particles–mostly smoke because the smoke from homes hits a certain layer of air and bounces back.  You can see that everyone’s smoke flatlines at about 100 feet, going sideways, and coming back down, like we’re attacking ourselves.  Certainly Riverdale has been warned about woodsmoke pollution….but at -40, who’s listening?  (And -40 is where all temperature worlds, both those who live in Fahrenheit and those who live in Celsius, meet)

It’s interesting to think of the city all divided up into parts, separate sections outside of their context.  Like the world ends at the end of the street.  In some ways it was like speeding through the countryside of Texas and seeing each section as if it were its own small town strung together like pearls on a string heading towards the big city.

I saw Raoul Bhaneja’s one man version of Hamlet tonight, so I’m really enjoying language.  Makes me want to read, or see, Shakespeare more often.  Also makes me think of transitions–from one street to the next–from one scene to the next–my whole town was in crossfades.