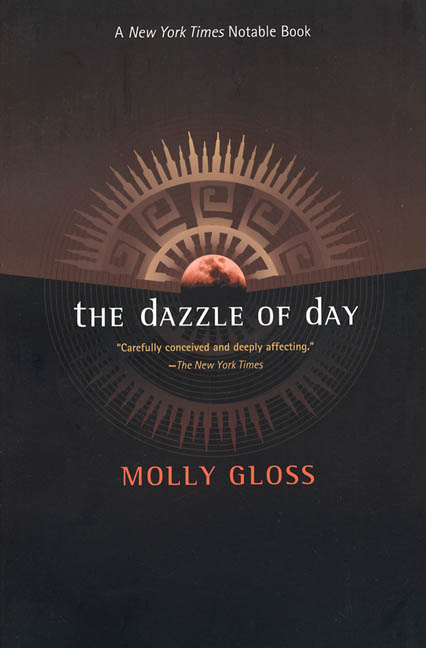 Jo Walton has a nice 2009 review of Molly Gloss’s The Dazzle of Day over on Tor.com.  This is another book to add to your reading list if you like faith represented in science fiction/fantasy, and want to present faith reasonably well–without being preachy, or limiting a faith.  Certainly this book caught my attention.  I went to a seminar once on Quakers in Science Fiction which rattled off quite a few of those books.  I no longer have that list with me, but there is an annotated list of Quaker references in science fiction at adherents.com site.  Let me hit some highlights for you, and then give you the link to Jo Walton’s essay on Molly Gloss’s The Dazzle of Day.

Some of the books with major Quaker themes/ characters/ plot lines include:

Joan Slonsczewski  A DOOR INTO OCEAN, STILL FORMS ON FOXFIELD, THE WALL AROUND EDEN

How Can Quakers Be Helpful in Contemporary Science Fiction?

1. They value peace. When a lot of science fiction–and society–seems to glorify war, or see war as an inevitable part of our collective futures, Quakers do what they can to keep peace.  In our futures, a culture that establishes or tries for peace is a valuable asset. We’d like our futures to be war-free.  How do we get there?  Could the Quakers hold a key?  So much of our science fiction is becoming GrimDark.  Quakers as characters who value peace can help your story try to create peace as a goal–without fighting.  Though Friendly Persuasion was a big movie for Quakers–as it showed Quaker life well–unfortunately, the plot was about pushing a Quaker to the point where he would use a gun and go to war.  I hated that.  I don’t think that’s the only plot/arc available to Quaker characters: the above mentioned books and The Dazzle of Day have more than that arc to play with. If you want to understand more about creating peace, research some Quakers, consider throwing that into the mix.

2. They value equality.  While some came late to the Welcoming and Affirming practice, the services of Quakers can be a lovely lesson in re-distributed, decentralized power.  They tend to avoid creeds and hierarchies.  Sometimes you sit in a service, an unprogrammed meeting of worship, in a circle and wait for the Spirit to move someone to speak.  If it doesn’t happen, you just sit there, or you may sing.  Even when I attended a church in the Nebraska Yearly Meeting, a programmed worship service still had an extraordinary moment when the pastor stopped talking, and there was silence after the sermon for the Spirit to move in the congregation and then anyone–ANYONE–who wanted could stand up and speak.  It was Open Mic.  Quakers knew that the Spirit could speak through anyone–not just the pastor. Also, a higher majority of women were the strength and voice of the church than in most denominations I had attended.  (I think the United Church of Canada has that same equality of voice and strength).

3. They resisted authority.  Oh, did they. Some in the Friends community I knew refused to pay taxes as long as they went to War efforts.  And they were successful!  Your space-faring quakers might well be those who can lead a rebellion just through resistance.  They won’t fight, but they will resist.

4.  They have a strong community.  Want your characters to have a strong sense of community?  Quakers stick together. They aren’t ruled by following one charismatic leader–so therefore there’s a tendency to want to keep everyone together since anyone could have the wisdom that week.  And they’re modern.  They aren’t Amish, but they still feel separatist, even surrounded by society.  The Amish might not be able to run a spacecraft, but a whole bunch of Quakers–sure!  They love technology.  It doesn’t interfere with their faith.

I think something that helps Gloss’s The Dazzle of Day is the fact that it’s shaped like a memoir, with a memoir-voice.  Faith literature is mostly first person, and to really tap into the faith-side of your science fiction, going with a first person narrator gets your reader deep inside and intimate with a character and their deepest beliefs.  I think it’s a beautiful way to chart a spiritual journey.

Here’s Jo Walton’s review of The Dazzle of Day:

The Dazzle of Day is an astonishing short novel about a generation starship.

There have been plenty of books set on generation starships by everyone from Heinlein to Wolfe, but thing that makes this stand out is how astonishingly real the characters are, and how well fitted to their world. Gloss has an immense gift for getting inside people’s heads. This story is about people both like and unlike us—they are culturally Quakers and they’ve been living on the ship for generations, which makes them very different, and yet they’re unmistakably people. They’re my favourite kind of characters, people I can understand and get inside their heads, and yet very different from the standard kinds of people you get in books. They’re very much individuals, not types, and they’re very much shaped by their culture and experiences.

One thought on “Space-Quakers: Why Quakers and Quakerism Can Find a Home in Science Fiction”