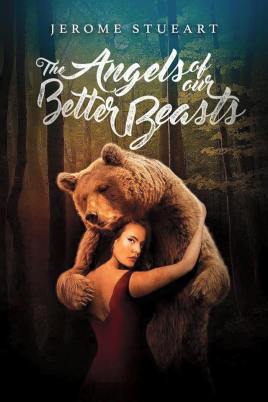 Many folks are writing up their last year’s work for possible awards eligibility, and since I did a compilation of work, I want to distinguish what’s new and what’s not.

But first can I say:  Finally, after years of writing, I published a book!  YAY!  It feels good to get something out and in a finished form. Needless to say, I’m very proud of this book.  Whatever it does in the world is fine with me.  It is a record now of what I’ve done.  I hope you like it.

Collection of Stories: The Angels of Our Better Beasts, from ChiZine.

This collection pivots around beasts–the animal kind, the monster kind, and the kind we turn into with those we love–and asks questions about the influence we have on each other.

The Lemmings are really researching the Arctic biologists, the werewolves sing sweet Christian praise songs, and the signing gorilla just wants someone back in the cage for a minute or two. The Gryphon can fight your war for you, and there isn’t really a problem when the man you’ve been online dating turns out to be a bear, is there? No worries. Those old lions in the canyon aren’t up to something, are they? The doctors in the red coats just want to cure you of a terrible blood disease. Trust them. In the forest, the sasquatch has fallen in love with the cryptozoologist who follows him, while the god of the Brazos River courts the young, pretty Texas college students.

Four of the stories in this collection were new in 2016 and are eligible:

Sam McGee is famous for his appearance in the Robert W Service poem, “The Cremation of Sam McGee” so famous, that the real Sam McGee was once offered a bag of his own ashes when he came back to the Yukon.  This poem is him in sudden conversation with his own “famous” ashes….

Always loved werewolves but wanted to play with the trope.  This werewolf is hiding in a gospel bluegrass band as the lead singer and banjo player.  The other members know, and they keep him shackled on moonlit nights, but they won’t kill him because the band is the best-selling, triple platinum soul-winning force for Jesus.  And though he’s killed two people, they are saving souls and doing good in the world and maybe that balances out two murders…

“You Will Draw This Life To Its End”

Auguste Rennault is an older  painter famous for his depiction of our human advance throughout the solar system–but he wants to retire to a mining colony in Jupiter-irradiated space around Ganymede to be with a man he loves.  The art community and his funders resist so he creates a great work to paint the miners, living with them, knowing it will be his last.  Instead of retiring, he starts using his fame to change the balance of power between miner’s unions and corporations, illustrating the Miner’s Strike,  trying to see how far the corporations will go to protect the famous painter in a dangerous place.  But it’s not easy to ascribe fame onto others, or use your fame for social change, and there are limits…

A young prince awakens to find his Holy City under siege, his father and brothers and sisters dead in a battle and himself as the recipient of the crown and the “great wisdom” that is said to pass from King to oldest surviving heir.  But are all his choices now coming from “the wisdom”?  And is it wise to awaken the unpredictable Gryphon to save the Holy City?  Everyone seems to have a plan on what to do for him, but none can really trust a prince who wants to wake the Gryphon.

I wrote one flash fiction piece, “Your Weird Aunt Pollymorph Says Hello,” that appeared in 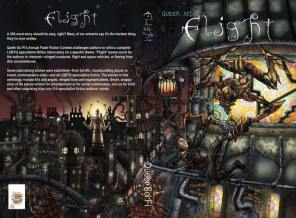 FLIGHT: the Queer Scifi Flash Fiction Anthology from Mischief Corner Books and won first place in the contest they had.

It’s about a sentient holographic computer interface that can take on the shape of the person best suited to work with you, but who is struggling to understand who to be for a ten year old girl whose mother has taken her from her friends and brought her on the ship.

I also was able to write a couple of good blogposts, namely “My Mother, My New Club, and the Swastika On My Shoes” and “Wealth has always been the greatest (unspoken) superpower”

Since I’m both American and Canadian, my work is eligible for Auroras and Sunbursts as well as World Fantasy and LGBT awards.

Overall, this year was a production year of getting the book ready to be published and then getting it in front of as many eyes as we could.  I moved Dec 30-31 of last year to a new place–so I was in Kettering when this year began.  An upstairs lofty, quirky kind of bedroom and outer-room that became an office.  From January-February, I was packaging the book together to give to Andrew Wilmot, my amazing editor, working at the behest of ChiZine.  I wrote two of the stories then–the long ones.  We had to make decisions at the end to not finish a couple I’d have loved to have in there, but they were long and they were taking a lot of time to get finished and would have made the book unbalanced.

After Andrew sent the manuscript back with edits, I worked on it even more through April.  Then in May I moved back into

my friend’s house in Vandalia and drew 15 illustrations for the book.  My banjo playing werewolf from “Heartbreak” is one of them:

Once I sent those off, I went off to see my birthmother in Daleville, IN, some friends in Chicago, and then off to a novel-writing workshop in Kansas–met Kij Johnson, Andy Duncan, Chris McKitterick and a lot of wonderful new writers.  It was a hot, muggy, but informational two weeks where I learned a lot about myself as a writer and what I was prepared to do to write a novel.

When I returned from that, I taught a six week research writing course at UD and then moved into my new place in August in the Fairview area of Dayton.  Sept-Dec was teaching, teaching, teaching, and grading, grading, grading and taking on a new job as a Marketer for ManCo Property Services.  I market their property and work on their Salem Avenue Peace Corridor newsletter.  In October, my book came out!  I took it to World Fantasy in Columbus and launched it there (even though it wouldn’t be available in the US till Dec 13, another two months), then went to Toronto for the Canadian book launch of AoBB, and Texas for Thanksgiving to see my folks, followed quickly by a long trip to Whitehorse, YT and Calgary AB to see friends and recuperate from a long year.

In September I did an overhaul of this website, but will do another in a few days.  I’m making a promise to use blogging more this year and Facebook less.  Facebook is ephemeral and it’s hard to recapture what you did unless you want to scroll back through everything slowly….

2017 will be a huge production year too as I get One Nation Under Gods written and finished by the Fall for ChiZine, as well as a couple of stories that have been waiting a long time to be done.  I want them done by February.  I take on a new editing project–more on that in April–and some new changes in the Fall of 2017 for me, most likely.

So this was my year!  It was a good one.  We’re gonna make another one like this, but better for 2017.  Thanks for being a part of it!