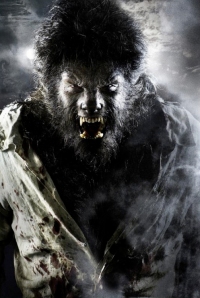 The Wolfman,(2010) directed by Joe Johnston, starring Benicio Del Toro, is a remake of The Wolfman, (1941) directed by George Waggner, and starring Lon Chaney, Jr.  You know that.  My biggest question through the movie is WHY REMAKE IT?

The first half hour is a snoozer, merely a recap of the film you’ve already seen.  In fact, the writers so depend on you knowing the characters from the 1941 movie that hardly anyone is allowed screentime to develop as NEW characters.  Who is Lawrence Talbot in this version?  We don’t know.  He’s cast in such dark and moody lighting, such gothic teasery, that we don’t get a sense of Lawrence as a person.  They make the BIG SIN of Bad Movies–let the actors only talk about the Plot. So, every line, every snippet of dialogue is there to give us Backstory, Context, Tell Us Things We Should Know–but no one is allowed to actually talk about anything else.  No one asks anyone to pass the salt.  There’s no time.  We must talk, and talk quickly, about the plot.

To the movie’s credit there are three new twists thrown in:

1.  Lawrence Talbot is an American Actor, starring in Hamlet in London. This is cool. I don’t mind there being some Shakespearian allusions in the movie!  Yay!  And Lawrence Talbot and Hamlet have some similarities— they’ve seen the truth about their fathers; they have seen their mothers ravaged by other men; they were gone for most of their adult life and are brought back for a funeral; they are in a quandary about what to do; their girlfriends think they are insane; they must kill their “fathers”.  Brilliant idea to show these similarities.  But where Shakespeare’s play develops characters, Johnston’s movie superimposes limp characters onto established patterns.  Not only is Del Toro’s Talbot hoping you think of Chaney’s Talbot, but he’s hoping you think of Hamlet–except Hamlet was clever, Hamlet PLAYED insane, Hamlet had a plan…  Talbot in this film has no plan.  He’s a victim of the werewolf, a victim of his Father, and ultimately a victim of the town.  The Comparison to Hamlet is an attempt to ride on Shakespeare’s coattails and give this film some depth it doesn’t earn.

IF they had started the movie on stage with Benicio Del Toro, playing Hamlet, going backstage to hear that his sister-in-law had written to him to come to the Family Manse, there’s been a murder–and he had to go back onstage—that would have been interesting.  It would have been SCENE.  We could have seen Talbot as an actor, as a person….  BEFORE he goes home to Goth House.

2.  Anthony Hopkins is HIMSELF a Werewolf. Cool.  In fact, I think both men are sexy as werewolves and the battle scene is beautifully done and fun to watch.  In fact, I’m sure that battle scene is worth the whole movie to some.  By making the dad a werewolf too, you add a great deal to the idea that Fathers make their Sons into monsters when they are monsters.  And I kind of liked this aspect of the movie.  It should add a depth to becoming a monster–abusive parents create abusive children, etc.  But that’s not really explored.  The Dad is completely heartless in that he’s finally decided to embrace his inner Werewolf and just kill at random.  He has no reason and no regret.  And so, we don’t care about him.  He’s one-dimensional and speaks from the script. And neither man can stop himself from killing once he’s a werewolf….  so why bother with morality at all?

3.  Lawrence Talbot was sent to a mental institution. VERY cool.  I like this.  It’s logical.  He sees his father kill his mother and goes a little bonkers.  And then they send him to America where those who are a little bonkers will fit in.  One scene.  That’s all the movie gives this beautiful, but underdeveloped, idea… so Talbot is dunked in icy water and given injections, and we get a flashback.  That’s it.  And, the second major transformation happens here…which is fun to watch.  But the addition of this backstory is sewn on with big thread and doesn’t really match the rest of the movie.  It isn’t utilized.

Some inconsistencies in this movie made this remake more confusing and tiresome.

A.  Why wasn’t Lawrence killed when he saw his father eating his mother? None of the other werewolves have stopped to save a child…. Lawrence should be dead, or he should have never seen that incident.

B.  Sometimes the moon comes through a cloud and changes you AT ONCE, and sometimes, you get to walk around outside or inside as a human being until you’ve finished your dialogue, and then you get to transform into the werewolf.  There’s no clear rule about transformation. Bad.

C.  What is the purpose of the Inspector or Gwen now? They are Wasted characters because they’re not given any screen time to really develop.  In 1941, Lawrence Talbot was a normal man, flirting with a beautiful girl, come back to run the estate of his family.  When he is bitten, that first “normal” life is taken from him.

Watch this here and see the development of character in a 1940’s way (and, wow, is Lon Chaney Jr. a hunk of a guy)

In 2010, Lawrence Talbot is already doom and gloom, and his bite is just further nightmare.  Nothing is normal in this new Talbot’s life.  The girl he’s flirting with now–that’s his dead brother’s fiance.  His father?  A werewolf who killed his own wife.  There ain’t a happy moment in this film–and therefore, without that happier beginning, there is no tragedy.

This was the HEART of the 1941 film. That a good man could be destroyed by a bite from a werewolf.  It has been ripped out of the chest of this story to make way for a kind of pre-ordained House of Usher doom….

So I come back to my first response:  WHY remake such a classic film?  To get neat special effects in and to get more gory.   There are some scary moments in the film, but twice we are blatantly tricked, making us feel like fools:  Samson the dog scare us at quiet moments.  (Oops!  Not a werewolf…shucks.  Gotcha anyway!)

There’s lots of killing, lots of killing, and it’s so random, that after awhile, it all becomes white noise.  Six people, ten people, there’s no challenge to the werewolf.  THEY ALL have silver bullets, but not one of them can shoot straight?  Yeah, right.

Bottom Line: Beautifully filmed and with stellar special effects, the Wolf Man gives us nothing else new and tarnishes what was good about the original. If you’re interested in seeing the classic, follow the Youtube connection above to see the whole film.

3 thoughts on “The Wolfman: A Waning Version of the Original”