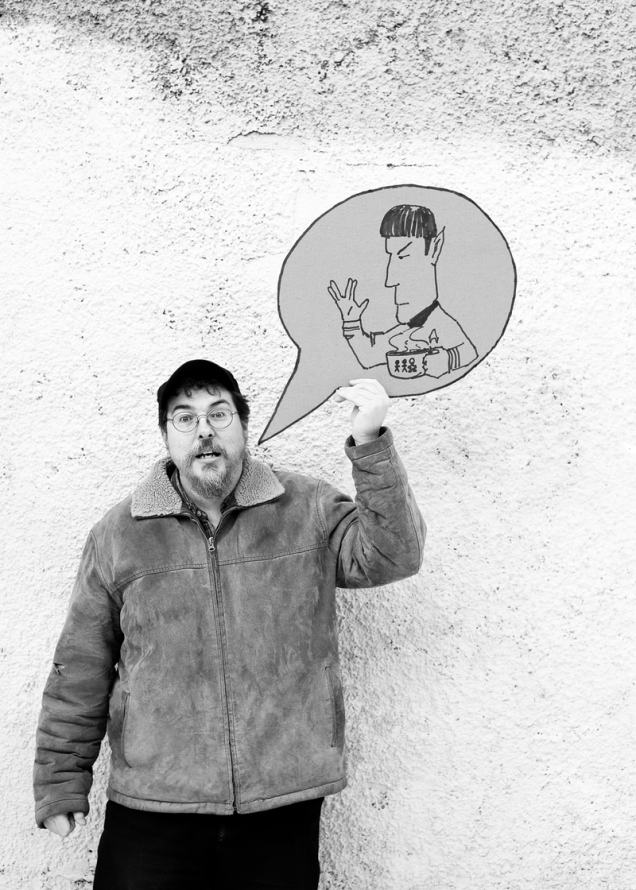 Some stunning work by Morgan Whibley, a Whitehorse based photographer.  The Alley Series.  (Yes, it was stunning and fun even before I was a subject.)  His rules are simple:

One alley from sidewalk to sidewalk.
Ambient light only.
A different person everyday.
Seven days a week.

He’d been doing this for 43 days in a row when he ran into me.  Follow the link, get stunned by his work.  All Yukoners, all beautiful pictures, wonderful, fun people.  They are our stories.

But my story got me to thinking about being a writer of genre.

Morgan tells me to come into his shop, Photovision, and when I get there he cuts a piece of cardboard from a box, slaps down two markers and says, Draw.  What do I draw?  He’s made a speech bubble.  “Whatever you want to.”  I have NO idea what to put there.  He wants the first things I think of.  I hem and haw a bit.  Suddenly, I just sketch out a design and draw Mr. Spock with a latte from Baked Cafe there.  We shoot the photo in the alley.

And then, it’s over, so I think.  And I’m halfway back to my truck and I think–“You fool!  You could have said something important about the value of words.  That words can be healing, or words can be explosive and destructive.  And what did you do?  You did something frivolous.  And stupid–and highly derivative.  Are you just a Trekkie? Is that all you are?”  These were the voices in my head.

So I ran back to Morgan, grabbed him by the shirt collar.  “We have to do it again!” I said.  Okay, maybe I didn’t grab his shirt collar, but I was insistent that we do it again because I’ve thought of something more important to “say.”  So he patiently carves out another speech bubble for me, and I draw out the symbol for Medicine (you know, the two snakes wrapped around the staff with wings–started by Moses, so long ago)–cause I’m going for “Healing Words”….

So, we go out into the alley so I can get shot again.  And we’re both thinking the same thing, and we’re talking…maybe we’re overanalyzing, we both say.

And we take the shots.  And they are highly thought out…  and they say the “right thing.”  But they seem orchestrated, forced.

I think, later, that THIS is the argument that every writer has with him/herself.  Especially writers of any genre: humor, science fiction, romance, fantasy, western, children’s, young adult, gay, hairy monster, etc.

We think that we must say something IMPORTANT with what we write.  That we have to use our considerable talent, and all writers have “considerable talent” with words, and say something like “WORLD PEACE, IDIOTS!”  or “Stop oppressing us!!” or “Global Warming is REAL!”  or “Whales don’t deserve to be SHOT!”  And who can argue with these messages?  Certainly they are important.  We all know that.  And certainly other people will consider you a much weightier writer, a writer with HEFT, if you can tackle Global Warming, or Teen Pregnancy, or something important, in your writing.  They often give awards in that direction (and they do it in film too….).

But who’s to say that the person who laughs at my first photograph won’t be healed?  Who’s to say that you can’t heal someone with words without broadcasting that you are HEALING them?  Who wants to be hit over the head with a message?  And why can’t REALLY good genre do everything that you need it to do–be a damn good story, with a subtle message and a lot of entertainment?

I think, as writers, we all balance between these two photos: the need to say something important, and the need to say something fun and frivolous.  And we see them as two different categories.  That we can’t be fun and important.  We see this in many other areas too (religion, politics, leadership), but for me it resonates as the battle I fight every day:  What value, I think, is Fantasy writing? How does it help the world?   Shouldn’t I turn my skills to Environmental Literature?

No.  You should only do that if you are called to do that.  If you try to write Environmental Literature and you were born to write Children’s Books about Rockets and Squid–then you will be a very frustrated Environmental Literary Writer.  Where is your passion?  If you find your passion, I think you get the package deal.  You will affect people in important ways by being yourself.

There is no real dichotomy between writings—there is only being true and not being true to yourself.  The truth is–we need comedy, romance, westerns, mysteries, radio dramas, children’s picture books with gorillas in them–we need to laugh to fight the absurdity, we need to feel hope in the face of injustice, and we need to fantasize about escape.  We need it All.

Write your part of the All.

2 thoughts on “Morgan Whibley Shot Me in the Alley and All I Could Say Was This: An Essay on Writing Genre”