As most people know, on June 1st, Netflix decided not to renew Sense8.  Fans of the Wachowski Sisters + J Michael Straczynski show, a show that weaves a global narrative to tell a very human story of eight people sharing their minds, knowledge, and empathy, were devastated that the story would not have a third season.  Many knew that it only had one more season of story, but Netflix decided not to renew.  Then the fanbase rallied and wrote and tweeted and called out! and helped show-writers garner a 2 hour special for Sense8!  Amazing!

I am so happy that we get 2 hours to wrap up Sense8, and don’t take this blogpost here as less than gratitude for that 2 hours.  But I’d like to make a bigger case for you–a case you haven’t heard–about giving Sense8 a whole season based on what might be good for Netflix, not just for fans.

While there has been speculation as to why the show was not renewed, that’s speculation.  Netflix spends a lot of money trying to find hit series, and sometimes a good series doesn’t find the right market.  When the cancellation happened, there was plenty of anger towards Netflix, and, in the moment, I even threatened to dump Netflix.  But I love Stranger Things, and I watch Star Trek, Daredevil, Luke Cage, etc.  It would be hard for me to dump Netflix for good.  I know, they’re counting on that–they’ve made us LOVE this service. Okay.

Why Netflix Would Want to Complete a Third Season of Sense8

1. NETFLIX IS COMMITTED TO COMPLETION: Sense8 has exactly ONE more season.  It’s a three season arc.  You renew that last season, you are a hero, and the story is complete, and people bingewatch the three seasons for years afterwards on Netflix.  They will come to Netflix for those three seasons.  You’re not having to commit to an unknown number of seasons, or risking anything AFTER this season.  You already committed two seasons and they were amazing, and fans loved them, and they are almost home-free.  You create NEW fans by following through on your series.  But MORE people will become afraid to watch or commit to a new series if the series could be cancelled before it’s finished.  The more unfinished series, the more Netflix becomes untrustworthy for a new viewer.  The positive spin: you complete series, and they can be assured that when they watch a series on Netflix, especially with the millions of fans this series has created, that it will have closure–that series runners will know ahead of time that their series must establish closure.  This one is close to being finished.

2.  NETFLIX EDUCATES ITS VIEWERSHIP ABOUT VIEWERSHIP.  You teach Netflix viewers about Viewership using Sense8.  Part of the shock of this announcement was that viewers thought that their fan base was enough.  We don’t get to watch the Viewership numbers like you do, so we can’t tell when to rally, or how we’re doing, or if we’re about to fall.  It’s a bit unfair to a very large group of fans to say that their numbers are not enough.  What kinds of viewership help make your decisions?  Do you need a certain number every week?  And how do you calculate when you drop 10 episodes over a weekend?  How many times should we view it?  How many tweets do you need?  How many blogposts analyzing the show?  If you give us those numbers, WE CAN HELP SAVE THE SHOWS WE LOVE.  I guarantee that the fanbase for Sense8 is the most dedicated fan base you’ve ever had (more on that below).  But telling us to love a show and then, when it’s not good enough, taking it from us without telling us how to celebrate and support it correctly can be very bad in the long run–it leaves a bad taste in fans’ mouths.  Netflix needs to teach its viewers what matters to save a show–how can we love a show enough to keep it if we don’t know what you need?  If not, fans won’t try a show till a second season is guaranteed…or may just not try it unless you do what you did with The Crown, and guarantee 6 seasons to tell that arc.

END_OF_DOCUMENT_TOKEN_TO_BE_REPLACED 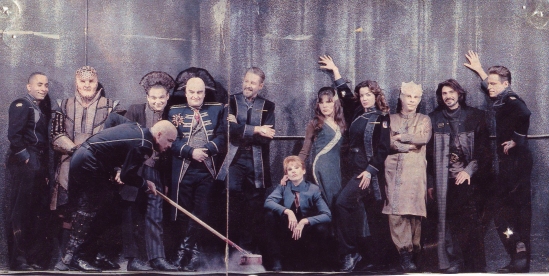 I’m late to the game in loving Babylon 5, having dismissed it for years because everyone said it was “better than Star Trek” and that I “should” watch it.  I resist those kinds of marketings.  Tell me I “should” do something and I naturally resist.  This is why I only joined Team Harry Potter long after Book 7 was published.  I certainly didn’t like the implications that B5 might be better than Star Trek.

Be that as it may, I have now binge-watched the whole series.  I was waiting to do an essay on the religion and faith I found embedded in Babylon 5, but I think this essay, originally on Right Fans, captures something of that–and so I’ll put it on the table to consider.  I’ll start the article here, and then provide a link so you can finish it.