1.  XM: So much more character development of several characters–Rogue, Wolverine, Magneto, Xavier, Jean Grey.  This movie takes time with its characters and keeps focus on Wolverine as the “schill” or the “new guy” who gets to experience all the Xavier School like we do, for the first time.  He operates “as us” so other characters tell him things we need to know.  Their world is well-developed already and intricate and we get the idea that it’s solid and has been this way for awhile, and has stuff that we haven’t seen yet.

XM:FC barely develops Eric as a tragic, one-note, revenge-minded character, and Charles as a 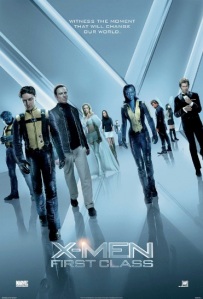 privileged fop whose compassion comes because of his blindness to others hardships (though occasionally, his mind-link helps him “understand” your pain).  FC Xavier comes by his compassion too easily; original Xavier seems much kinder, empathetic, a person I’d admire.

None of the minor characters in XM:FC are even developed.  They barely get screen time except to fight.  Sure XM has its share of background/throwaway characters who simply run through a door, or make an ice rose, but we don’t need to know who they are.  They aren’t pivotal to the plot.  XM:FC characters are, and it’s a shame they are never really developed.