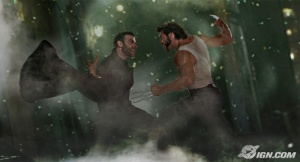 While Wolverine looked promising, it was a confusing mess of action with never a moment of tension. The problem was established early–in the credits–and this hindered us from caring about the characters.

If you make your characters indestructible, then you eliminate us from caring. It was the problem with Superman many years ago–he had no real vulnerability. So the writers rewrote him. Here with Wolverine and Sabertooth, they are given nearly immortal status at the beginning of the film. They don’t age slowly–they just don’t age once they hit their thirties. And they go through the Civil War, WW1, WW2, and the Vietnam War all in about ten minutes of screen time. They are always frontline, get shot at over and over, get hit, but never get hurt. There is no danger for these guys. None. That is established up front. So why would there be any tension in the film?

The film goes on to try and make Wolverine truly indestructible by giving him admantium bones. But since he was already invulnerable (yeah, he could get slightly bruised in a fight with his brother), the admantium claws gave him no discernible advantage. Ah, yes, in fights with Sabertooth, Sabe’s face was a bit more pained–but he was still walking tall after the fights. Spare me the argument that they can heal. 1) An ability to heal that quickly means there are no consequences. No consequences eliminate plot and choice–both essential to story. 2) Wolverine never healed that quickly in the comics. The point of Wolverine’s healing ability was to protect him in the long run, but he got beat up bad in the comics. Often, it would take him days and weeks to heal. And that’s good—it made him vulnerable, but gave him a slight advantage in the ICU. It made me care. But in this film, immediate healing meant that two shadows were boxing each other. I thought–so what?

The fights were scripted so that either Wolvie or his opponent should fall down so there could be a bit of dialogue, or a change of scene. If Sabertooth met up with any other character, that character was toast. It was just a matter of time. Because Sabertooth was established as indestructible.  Worse yet, I am now not sure what Sabertooth is really responsible for–since his main kill comes back to life.  The body count might have been high–but a viewer can’t care if the bodies spring back to life or never had much life to begin with.

I was looking forward to Cyclops, to Gambit, Blob, etc. These characters were used more for the trailer than the movie. This movie had no arc, no plot, and characters who needed to wade through two hours of special effects to return them to X-Men 1, where they began.