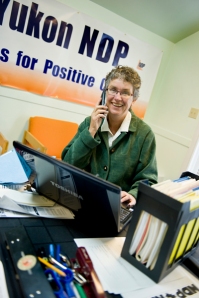 I haven’t been to a political rally before.  I went to the NDP rally just to see what they were like, and because I had met Liz Hanson.

Meeting a candidate makes a difference.  Perhaps you, candidate, wonder what all that door knocking is for—or you, a citizen, are annoyed by all the door knocking that happens around an election.  You both wonder why anyone really does it.  Don’t all the commercials, all the posters, all the op-ed pieces help you know a candidate?  Doesn’t it make you likely to know how to vote?  Nope.  (Ok, sometimes it has to.  Not every person can meet the Presidential or Prime Minsterial candidate.  I voted for Obama from what I read, what I saw on TV, watching him at rallies, in speeches, at town halls.)

Meeting someone changes our minds.  Most of us cannot be changed purely by intellectual discovery—some a-ha moment that gives us the clarity to change our minds about an issue.  Most of us recall an event—a moment that has another person in it—that made us feel the way we do about that person, about their race, issue, belief, etc.

Encounters.  We change because of encounters.

Liz Hanson, NDP candidate, was canvassing somewhere between 7th and Strickland—and I was housesitting for a friend.  She knocked on my door and told me who she was and what she was doing.  I politely told her that I was an immigrant and therefore not allowed to vote in the election.  Seriously, I’m not proud of that:  immigrants should be involved in politics, in understanding and learning about their new country, even if they currently don’t have a vote.  But, frankly, I probably felt a little indignant about the irony of being canvassed when I don’t have a vote—I probably thought that she would just go away if I showed my political impotence.

I mean, really.  Why would she spend her time on an immigrant without a vote?  She couldn’t reap any immediate benefit from spending time with me.