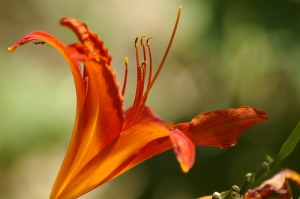 Okay, I’ve seen the trope enough.  Yes, it is a hopeful image, but it perpetuates a myth.  End of movie: three or four people after post-apocalyptic disaster come out to “healed” Earth.  200 years in City of Ember.  700 years in Wall-E.

Gaia is a nice idea–that the Earth is bigger than us and will heal itself even from our damage.  However, it lessens any personal responsibility, and gives us some odd idea that humans, in the form that we know them, will be back one day after the Earth has gone through a cycle similar to a self-cleaning oven.

Oddly enough, the base idea is shared by those who don’t believe in Global Warming, or who don’t believe that Man is causing global warming–the idea that the Earth shifts in cold and hot and finds a balance and everything is returned to a state of Eden.

Here’s two things I know: The last Ice Age was a documented shift in the planet’s balance of hot and cold.  Those ice sheets lasted for more than 100,000 years, ending about 10,000 years ago.  The animal and plant life that we know from then have changed quite a bit over that span of time.  No more giant ground sloths, mammoths or neanderthals.  Even the steppe grasses are gone.  So,  it took the Earth 10,000 years to right itself–after some massive glaciation.  In other words, Global Warming may well indeed have been a natural shift, but Humanity will not survive a massive shift like that–certainly not in the way we are now. And likely, the Earth will come up with some radically new life forms–if it recovers at all.

The second idea here is that the Earth can take a beating from us.  No problem.  A) if it disposes of us, what have we learned?  and B)  We are capable of damaging an atmosphere irreparably.

Those Ice Ages, devastating as they were, still counted on an atmosphere.  If we hurt our atmosphere, isn’t it possible that we not just trigger an Ice Age, but stop it from fixing itself?  James Lovelock, the man who created the idea of Gaia–the earth that is an organism–was interviewed in New Scientist.

Do you think we will survive?

I’m an optimistic pessimist. I think it’s wrong to assume we’ll survive 2 °C of warming: there are already too many people on Earth. At 4 °C we could not survive with even one-tenth of our current population. The reason is we would not find enough food, unless we synthesised it. Because of this, the cull during this century is going to be huge, up to 90 per cent. The number of people remaining at the end of the century will probably be a billion or less. It has happened before: between the ice ages there were bottlenecks when there were only 2000 people left. It’s happening again.

I don’t think humans react fast enough or are clever enough to handle what’s coming up. Kyoto was 11 years ago. Virtually nothing’s been done except endless talk and meetings.

Not necessarily. I don’t think 9 billion is better than 1 billion. I see humans as rather like the first photosynthesisers, which when they first appeared on the planet caused enormous damage by releasing oxygen – a nasty, poisonous gas. It took a long time, but it turned out in the end to be of enormous benefit. I look on humans in much the same light. For the first time in its 3.5 billion years of existence, the planet has an intelligent, communicating species that can consider the whole system and even do things about it. They are not yet bright enough, they have still to evolve quite a way, but they could become a very positive contributor to planetary welfare.

How much biodiversity will be left after this climatic apocalypse?

We have the example of the Palaeocene-Eocene Thermal Maximum event 55 million years ago. About the same amount of CO2 was put into the atmosphere as we are putting in and temperatures rocketed by about 5 °C over about 20,000 years. The world became largely desert. The polar regions were tropical and most life on the planet had the time to move north and survive. When the planet cooled they moved back again. So there doesn’t have to be a massive extinction. It’s already moving: if you live in the countryside as I do you can see the changes, even in the UK.

He has a lot of optimism that despite all the damage we can do as a species, that the Earth will recover–even that perhaps these amazingly smart humans, in his opinion, the apex of creation, will figure out how to live in harmony with the Earth–eventually.

But it also might allow both a fatalism and a hedonism to develop–as if we can do nothing to hurt the Earth at all.  Lovelock was instrumental in getting the global CFC ban that led to saving the Ozone layer.   Perhaps there are still more things to do to stop the warming that’s happening–as he suggests in the article.   Certainly, we have to think short term.  Lovelock’s vision–is that after thousands and thousands of years–humanity will survive and learn.  Movies shorten that to a few hundred years, a slap on the hand for our negligent behavior instead of the mass extinction probably waiting for us.  They believe in Man rebooting after the Earth has rebooted itself.  Repair-adise.

All these movies have people waiting out the storm, walking into paradise, virtually unchanged.  Free of humanity for a mere 200 years, the planet heaves a rainbow sigh of relief, bushy gardens of plenty.  But with our weapons we can inflict planetary damage; Wall-E can never clean up all the trash and one plant can’t feed the multitudes–and there will be a long wait for the storm to be over.  And humans may not survive as humans.  There may be no humans to come back out after 55 million years….and if there are, will they remember what they did wrong?  We have to affect change.

Sure, we may not die, but we will all be changed.

I love it when Science Fiction is taken seriously. I just saw Wall-E, the Pixar film, and it is truly wonderful. Frank Rich wrote a great column about how much more this film is saying than either candidate running for President. Check out his column–and check out the film.

Wall-E, like most Pixar films, is written well–playing on two tracks simultaneously: one for kids, one for adults. Wall-E and Eve could be a silent film–but it’s also the same comedy that fuels other Pixar short films, where there is usually no dialogue, and also has E.T. and the droids of Star Wars to thank for their non-verbal comedy.

The film does have great characters–again, I am shocked by how well minor characters are portrayed. Full arcs for the Captain of this floating Cruise Ship; for the two cruise passengers; for the cleaning robot; for AutoPilot. The heroes are well drawn too–ultimately sacrificing what they wanted for each other. When I got to that moment–call me a writing geek–but I smiled because it was just thing to complete these main character arcs–that sacrifice, especially in a love story. It had an O. Henry moment for a minute.

But in this age where all we can do is stare down a variety of Tunnels to Apocalypse, science fiction is telling the tales we are listening to. We’re either looking at a life changed by climate change, mass consumerism, lack of exercise…etc. Wall-E serves as a cautionary tale slipped in through the side door of a romantic comedy. When you get to the line “We have to get off our butts and do something” you know that the film has nudged you just a little. But it’s okay because the story is so compelling. It’s not a story written to tell a message; it’s a story that happens to have a message. 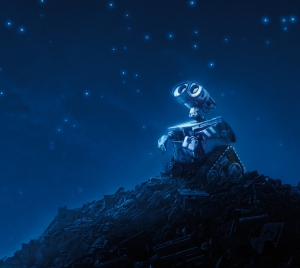