Everyone got excited about a light in the sky after sunset tonight, here in Dayton, OH.

We all went outside and it looked to my eye like it was moving, drifting, changing its brightness. Someone said it might be Mercury or Jupiter, so we all looked—and sure enough, that was where Mercury was supposed to be (though a little high). I’m sure now it was probably a weather balloon… shiny and drifting in the breeze… so bright.

We had a debate online about what it was, and it reminded me of this article I wrote about 10 years ago when I lived in the Yukon Territory (Spring, 2010 issue of Yukon North of Ordinary).

It was probably the best article I ever wrote–certainly one of the most fun–and it was for the magazine Yukon North of Ordinary, the in-flight magazine of Air North. I was asked to write it as a science fiction writer looking into sightings of UFOs. Everyone who commissioned this article thought it would be funny, light-hearted, and that I would have a great time talking aliens with folks, but that I would know the difference between fact and fiction.

Well. That didn’t go as anyone planned.

END_OF_DOCUMENT_TOKEN_TO_BE_REPLACED 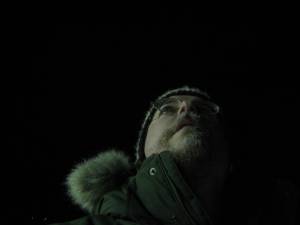 My article on Ufology in the Yukon appears now in Yukon, North of Ordinary.  The magazine is the inflight mag of Air North, one of the finest airlines.  I love Air North for its service, the fact that I know all the flight attendants, and for the Midnight Sun coffee and the cheesecake.  I’m proud that Air North ran the article.  They were both skeptical and worried that an article about UFOs in a magazine you read on an airplane might get people to thinking they were pushing the idea that UFOs exist.  But they ran the article, and I’m very happy to see it there.  The article focusses on the people who see UFOs, that they are normal everyday people.  Ronald Reagan saw a UFO, and the Pope just okayed the existence of extraterrestrials, so things are changing for aliens—we’re getting okay with them.  This article just lets you know that folks do see them, that they are normal people, and that in any other condition 32 eyewitness accounts that matched would be enough to prove something of this magnitude.  But, as of yet, no spaceship has dropped enough hard evidence to make us all believe.  That doesn’t stop these brave men and women who sometimes speak out, sometimes against ridicule.  Many keep it to themselves.  It’s good to listen to their stories and make up your mind later….

The article doesn’t itself endorse UFOs, but, like every issue, it does seek to promote the good folks of the Yukon, those who have seen UFOs and those who want to believe.  God bless Yukon, North of Ordinary.

For the article follow this link to What’s Going On Up There? (there is a place there to download the whole issue as a PDF)

If you have seen something unidentified in the day or night sky and want to report it, there is a website for that as well.  Martin Jasek and friends keep the UFO*BC website open for sharing experiences and for reporting sightings.  If you’ve seen something, fill out this online form.