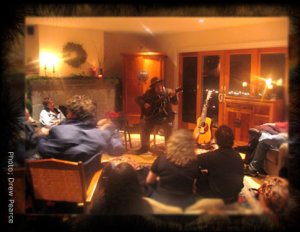 I attended a house party Saturday night–sort of like the one pictured here. I’ve heard of things like this.  Anne-Louise Genest explained a bit of the history of the kind of music she was playing with Sammy Lind and Nadine Landry that evening–how it might happen in a kitchen. The intimate setting was right. Miche and Hector had opened their home–moved back the furniture, rented folding chairs, made snacks. There was a charge of $15 at the door to pay back the hosts and the musicians for what turned out to be a beautiful evening.

It was planned well–limited to 25-30 people; people brought their own drinks; and the music was a mix of bluegrass/cajun with fiddle tunes throughout. There were two 45 minute sets, with a half hour break in between for mingling and snacks. And a lovely wandering dog in the midst giving out love to whomever reached out for her.

I remember back in 2002, a night in someone’s home after a party was drifting into the evening.  Folks would bring out guitars. It was a lucky moment, but only the six of us experienced it. Kind of a convergence of good fortune, talent, a long evening to linger around guitars.

But you can create a moment and plan it well too. The only difference between that moment in 2002 and this one in 2009 was the event that was created. Saturday was a performance in an intimate setting–aimed to be the focus of the evening. They asked friends (and a sister) who were performers to perform for us, rather than all of us hoping guitars might pop out after a dinner.  The performers were spotlighted.

My grandparents used to host Bob Wills and the Texas Playboys in their home. I don’t know how my grandparents knew them—I vaguely remember that Alpha and Jeff Stueart were friends of Bob Wills. But they played music in their home in between gigs around Texas and Oklahoma in the 30s and 40s, a time of Western Swing. I don’t remember that my grandparents ever played music themselves. My grandfather dug ditches and my grandmother was a cook, but they loved music and were good hosts. They opened their home to other people who would enjoy that music as well. They were dirt poor. But they knew the value of music.

We can’t always have a convergence of singer/songwriters at our dinner parties. But we can host a House Party and bring in performers that are coming through town. I bet we can do that with small theatre too. It had great planning and Miche and Hector created an evening I won’t forget.  I’d rather go to concerts like this, I think, than sit in a large auditorium.  Here I was a few feet away, and food and drink were handy.  Like an Irish Pub, in some ways.  But in your home.

House Parties eliminate having to make the modern choice between a night at home with the family or going out to a show. It takes us back to a place where we relied on each other. They brought the show to their home, and brought us to their home too. As Laurel Parry (now known as Larry) said to open the night. “Either we’re very cutting edge or we’re reviving an old practice–or maybe a bit a both.” Blogs have talked about this new phenomenon before and websites telling you how to host a gig like Concerts in Your Home.

But I think the one at Hector and Miche’s went really well. Maybe they were cutting edge, maybe just wanting to find an intimate way to have music in their home. Maybe we only remembered something we forgot we needed. I’m just glad that, clapping and stomping our way into the night, we all remembered it together, .