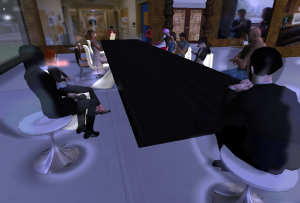 I just had an awesome experience today having my story critiqued in a workshop.  But this workshop is not in the real world but on Second Life, the online alternate world.  For those who are unfamiliar with Second Life, people choose an avatar and enter the world, run around, meet people, shop, make money, and in some cases, go to class.  This class, sponsored by the University of British Columbia and taught by Canadian writer, Kevin Chong, was an undergraduate creative writing workshop completely on Second Life.

Next you choose an avatar, and Second Life has probably the best avatar creator on the web.  Even World of Warcraft is limited to the six or seven creatures to pick from….  but on Second Life, you can literally be anything: a toaster, a zombie, an animated foot, a stuffed animal.  One day I am going to get the Minotaur with the Battle Axe.  Hehe.  But for now, I stuck with the free avatar and shaped him myself.   I also picked up some free body parts, skins, and adaptations for my avatar at a Men’s retreat center online called Thor’s Den.  I’ll admit, I went a little crazy on the avatar and he’s easy on the eyes.  So he’s not a perfect rendition of me.  But that’s the joy of Second Life.  You can be anything and anyone you want to be.

So students adopt a persona, and an avatar, that will represent them for the class.  They never reveal who they are until the last day–when there’s an option of meeting in person at what I hope will be a place with appetizers and drinks.   (Age appropriate drinks, that is)

Like most creative writing workshops, some students have had workshop experience, some haven’t.  But in Second Life there are also other things to consider: the conversation, the critique, all happens in chat box.  The chats are automatically saved to their computers so that they, and the teacher, can go back and look at comments people said.  This is invaluable for writers who want to have the transcript to go over comments someone said again.  While chat appears as it happens, avatars in the room look around at each other and do things, like pretend to type.  (It’s actually fascinating to watch).  But there can be complications too.  One person materialized as just a hairpiece and boots, with no visible body.  Another couldn’t stop herself from spinning in place.  One got locked out of the room.  Another couldn’t stop eating.  I couldn’t figure out how to sit.  Kevin’s router would quit and he would disappear suddenly from the room.  But eventually, all of us settled in (I sat, others stopped spinning and eating, Kevin stayed—unfortunately the hairpiece never gained a body and got sat on by another character who didn’t see the floating hairpiece.  Sorry ArcticFox7.)

Many of them were new to Second Life so were just getting used to moving around in this online world.  Others were old hands.  Online, you can swivel the camera around to get views from different angles, from above, from below, from the fronts and sides and even from a distance–so you can see who’s talking if you want.  I just place it on a group shot.  Also, the best thing on Second Life, is that everyone can fly.  And when you fly, you can actually see the land below you as you move…so the sensation is nice.  (I did get removed from the premises on a couple of places for accidentally landing on their roofs—but this did not happen in class).

After about a half hour or so of orientation to their new class, the critique began on my short story.  Kevin had asked me to be a guinea pig going through the workshop process so that students could see how workshop would go.   I fell silent.  They talked about my story.  For some, the anonymity made them feel comfortable to speak up, participate and offer critique.  They might have been shy people in a real world class, allowing others to talk more.   Others, I think, are just naturally gregarious on chatsites, comfortable in other online settings and games.  Here, everyone felt equal.  Everyone participated –and this is an advantage of the Second Life system.  I think UBC and other colleges that offer Second Life classrooms are onto something.  I can even imagine a Second Life class made up of folks who live all over the world, coming together to sit in one room.  True, I think there’s a lot of admin stuff that Kevin (I mean Keithmoon Drumbeat) had to know to make it all work smoothly, but everyone participated in the discussion.

The critique itself was fantastic and thorough.  There’s nothing like getting your work discussed as if it were any other piece of literature in a Lit class.  Not that it’s all favorable–it isn’t.  But people are talking about your characters, their motivations, their plots, their story arcs…. stuff that’s often reserved for published work, or canonical work.   It’s cool to hear.  It allows you multiple POVs on your story.  Insights you can’t have alone, in your kitchen, at a table.  And to hear which parts got through to readers, and which parts may need more work to get through—these are all helpful.

I’d like to thank the following participants for 8 pages of notes I collected:  Nemerle Firecloak, Gypsystar, chasingvertigo, AtticusCarrot, Mya 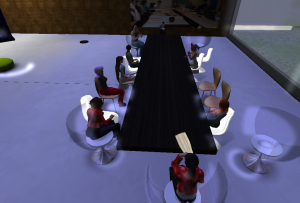 If you keep that level of critique up, every writer will benefit.  Thanks again!

Next time we meet, I meet you as a Minotaur….