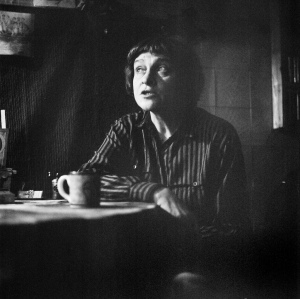 What is Faith to you?  How do you think about it?  How do you put it into words–to tell someone else what it means to you?  Does it only appear when you are going through struggles?  Is it constant like gravity?  I like this photograph by Grigory Kravchenko.  The woman looks up, but it looks as if she’s giving God a good talking to.  Faith seems to take place over coffee, and in a gritty real-world setting.

Starting January 21st (it was the 14th, but we canceled the first class due to extreme temps, -38C), the Whitehorse United Church and I have teamed up to offer a class in Writing Your Faith.  How do we put into words what is ineffable?

We’ll be looking at a lot of writers who have done just that.   Some you will find more effective for your style of writing than others.

While the majority of works that we look at will be of the Christian variety, they will not be texts that marginalize you.   They will be authors who struggle with the same kinds of questions that most people do when they are talking about a greater being in the world and how they interact with that being.  We’re not reading the selections to pick up content—it’s not an evangelical endeavor.  What we’re doing is looking at how people talk about their Faith, whatever their Faith might be.  So we’re picking up tips.  And those tips are good to use whether you are writing about yourself as a Christian or Muslim or Buddhist or Jewish or Agnostic.

Some people’s writing that we’ll be looking at include Annie Dillard, Anne Lamott, Krista Tippett (who does the NPR show called Speaking of Faith), Diane Butler Bass, Thomas Merton, Henri Nouwen, Donald Miller, Lauren Winner, Andre Dubus, Flannery O’Connor, Thich Nhat Hanh, Kathleen Norris, Philip Yancey, and others.  We’ll look at the impact of faith on social justice, on the environment, on making changes in society.  We’ll ask the question about when is a good time to write knowledgably about faith–is 16 too young?  Is 70 too late?  Can you write about it in fiction?  How do you not hit someone over the head with doctrine or belief?  How do you escape being labeled a “fundamentalist” or a “weirdo”?  And what if your faith did not sustain you in the hardships you faced–are you allowed to talk about this too?

If you’ve had experiences where your faith was affected in any way, come write about this with us.

It’s free.  Fridays, Starting January 14, 5-8; BYO Food.  It’s a 14 week workshop class, but we’re teaching it in modules. So you can miss a few and still know what we’re doing.  You’ll receive handouts for reading a week ahead of each module. (If we get more than 16, we’ll make arrangements)  Even if you aren’t planning on attending the whole thing, come the first night to see what it’s all about.  We’ll go from there.

We would like people to commit to as much as they can because you’ll get the maximum effect out of attending all the classes.  Workshops also thrive on “committed vulnerability”–aka Trust.  That means if you keep attending, you can submit your stuff to have people read.  But you won’t be trusted as part of the workshop if you just come for one day and then drop off something for everyone to read.  To submit work, you’ll need to be a regular attender.

People should be aware that folks from multiple denominations, multiple faiths, multiple beliefs will be attending, and this is a safe space for anyone who wants to write about faith of any kind.  We are all challenged by the things that happen to others, the ways they encounter faith.  It is all mysterious and deserves to be discussed and written about for others to experience.

You may just want to write something for your family.  You may have larger aspirations.  You may be writing history, or memoir.  Come whatever you are writing, whatever you want to do with your writing.

A big thank you to the Whitehorse United Church for sponsoring this class free of charge for anyone who wants to come.  Their ministry to you will be a ministry to so many others through your writing.  Thank you, WUC.

One thought on “Writing Your Faith: Workshop offered in January at the United Church”