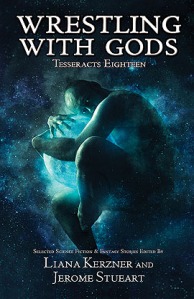 Happy Bodhi Day!  Tesseracts 18 has a COVER!  I’m very excited to show you the new cover for Tesseracts 18: Wrestling With Gods, the new anthology of science fiction and fantasy from Edge Science Fiction and Fantasy Publishing, latest in the long running, award-winning Tesseracts anthology series.

The Tesseracts Eighteen anthology is filled with speculative offerings that give readers a chance to see faith from both the believer and the skeptic point-of-view in worlds where what you believe is a matter of life, death, and afterlife.

The work is now available as an e-book download for Amazon Kindle, exclusively, until it’s available in print in March (Canada) and April (USA) and in other e-book formats.  Keep watching for more on Tesseracts 18 in the coming weeks!  Order your Amazon Kindle e-book today–just in time for some holiday reading.

On a personal note, I’m incredibly proud of this anthology! I have enjoyed multiple readings of the stories and poems included and I would say these represent the best of Canadian science fiction and fantasy–stories that also happen to speak on faith and religion in some way.  I think you’ll be surprised how easily science fiction and fantasy speaks on these topics–and remember classic stories and novels that have always spoken about faith.

Click on the cover to take you to Amazon’s Tess 18 site where you can purchase an Amazon Kindle download.  Again, print versions come out in the spring, as well as other ebook editions.

About the Editors for Tesseracts Eighteen:
Liana Kerzner is an award-winning TV producer & writer who was also in front of the camera as co-host of the late night show Ed & Red’s Night Party, and is currently the host/writer of Liana K’s Geek Download, heard weekly on the internationally syndicated radio program Canada’s Top 20.

For more on Bodhi Day–the Day Buddhists commemorate the Enlightenment of Buddha– see this link.