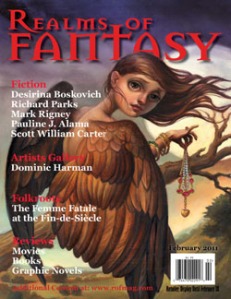 The Clarion Foundation (parent of Clarion Science Fiction and Fantasy Workshop) has a wonderful blog.  Douglas Cohen, an editor from Realms of Fantasy, recently wrote a guest post there talking about the view from Realms of Fantasy, from its long run in the industry, including its two recent revivals with new publishers.  There is some great insight here for those who are submitting stories and poems (yes, they have started publishing poems).  Here’s just a snippet, but the rest you can read on the Clarion blog.

1)     Fantasy is a broad genre, and it’s yet to stop expanding.  In addition to writers, editors are playing a crucial role in defining what fantasy is.  I’ve read a number of stories in our pages that I consider science fiction.  Obviously Shawna felt otherwise, or at least saw enough fantasy-related elements to justify publishing these tales in RoF.  Too often, I hear about authors rejecting themselves from certain markets because their stories are “not a good fit.”  Now, if you’re writing a hard science fiction piece in the vein of Gregory Benford or Isaac Asimov, it’s true that your story most likely isn’t right for us.  But if there is an element that could be considered fantastical in your sf story, who knows?  We just might buy it.  Did you know John Joseph Adam’s recent dystopian sf reprint anthology has a story from RoF in there?  Did you know we published a story with robots that were clearly inspired by Transformers?  Did you know we had a story about molecule memory that was reprinted in Rich Horton’s Science Fiction, Best of the Year, 2008?  I could go on.  The point—and this is something to keep in mind for all markets—is that it’s not your job to reject your stories for our magazines.  It sounds like a basic thing, but too often I see authors—including experienced ones—overanalyzing their prospective writing markets.  This is not a phenomenon unique to RoF.  It’s good to know your markets, because that might help you land a sale sooner rather than later.  But don’t be the editor for them.  I can’t stress this enough.  When in doubt, submit.  Let us decide what’s right for the magazine.  The worst that happens is that we say no.  To borrow (and probably mangle) a phrase from John W. Campbell: “How dare you reject your story for my magazine?”

2)     Shawna and I have different tastes.  Yes, there is definite overlap, and these similarities (and the differences for that matter) are why we work well together.  But I hear too many authors saying things like, “Realms of Fantasy is not a market for sword & sorcery.”  Ahem.  I love sword & sorcery.  I also unquestionably enjoy this sub-genre more than Shawna does, meaning I’m likelier to enjoy an S&S tale than she is.  But since I’ve been with the magazine, we’re publishing more in this area than we ever have before.  Not an overwhelming amount, but definitely more.  The point is that magazines change over time.  Too many people stop reading a certain venue for whatever reason, and five or ten years later, when they’re telling you their problems with this magazine, what they’re saying is no longer relevant.  Again, I see this happen with experienced writers too, so I feel I should mention it here.  So not only should you never reject yourself, but it’s also a terrible idea letting others do your market research for you.  Sharing ideas is fine, but make sure your friends are up to date on what they’re saying.  If the information is coming secondhand, make sure it’s coming from a reliable source.

There are eight more points Mr. Cohen makes–equally insightful. It behooves you (I like ‘behooves’) to run over there and check them out.  Happy submitting.

Mr. Cohen also makes a strong point about Clarion graduates supplying the magazine with quality stuff.  See that top name on the February cover of Realms of Fantasy—Desirina Boskovich?  One of my Clarion buddies.  Awesome, Desirina!