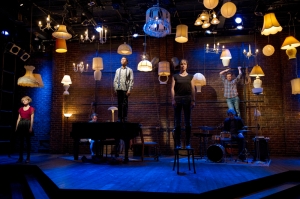 Deeply touched by the Arts Club Theatre Company’s production of Do You Want What I Have Got? A Craigslist Cantata.  Veda Hille and Bill Richardson have written a non-linear musical that uses actual Craigslist ads for its lyrics.  Craigslist, in case you’ve been in a hole, is an online one-stop-shopping for finding whatever it is you want— from someone you saw on the train that day, to an old trumpet, to homes for your cats.  It’s a pared down, non-glitzy site—just text–where you have to use words to sell what it is you want to sell, or get what you want. Ads are quirky.  I think with the number of them, people have to come up with newer and more outlandish ways to make their ad stand out.  It’s not a Tumblr site so there’s no pics in your subject line to make you stand out–just a line of text.  What is Craigslist anyway?

The musical is episodic, going from ad to ad, occasionally reverberating or repeating a motif in another ad, enough to make it stick together well.  There are a number of “characters” who have very specific and ludicrous (sometimes even strange) desires and wants.  It would be easy just to laugh at all of them–and we do.  Audience tonight was having a great time laughing it up at the woman trying to sell her 300 stuffed penguins, singing an alphabetical list of the different species of penguins and hoping to find a special child who might want them all.  Or the man who wants someone to sit in his bathtub of cooked noodles…  Or the wanderers who keep missing each other–though having a brief moment with someone they fall for.

It would be easy to laugh, except Hille and Richardson don’t let us off that easy.  They have found a way to make that search poignant, a statement on 21st Century technology becoming the medium for expressing our desires.  There’s a song though that Hille sings in the middle–a quite surprising song about Noah and the doves he sends out into the world to find land.  And this becomes the central metaphor that pulls the show together in a quite exposing, vulnerable, emotional way— that Craigslist is a collection of those doves, sent out–with no replies, really.  “No one learns how the story ends.  Did they find each other?  We don’t know,” Hille says in the Artist talkback tonight.  There are only beginning moments–story starters, if you will–but we don’t know if any of the missed connections actually connect.