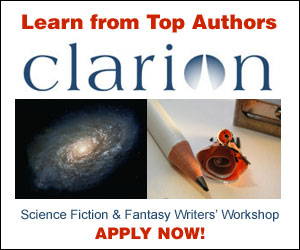 Clarion is widely recognized as a premier training ground for aspiring writers of fantasy and science fiction short stories.

The 2011 writers in residence are

Since its inception in 1968, Clarion has been known as the “boot camp” for writers of speculative fiction. Each year 18-20 students, ranging in age from late teens to those in mid-career, are selected from applicants who have the potential for highly successful writing careers. Students are expected to write several new short stories during the six-week workshop, and to give and receive constructive criticism. Instructors and students reside together in campus apartments throughout the intensive six-week program.

The application period for the 2011 workshop is December 1 – March 1. Applicants must submit two short stories with their application. Scholarships are available. Additional information can be found at http://clarion.ucsd.edu.

See my Page on CLARION 2011 for more info on what a Clarion can do for you.

Personally, I have to say that the chance to work with Kij Johnson would be enough to make me put on a disguise and go again, though, like Narnia, former Clarion grads can’t go home again….  Kij’s story, “26 Monkeys, Also the Abyss” won the World Fantasy award and was on the final ballot for both the Nebula and the Hugo.  It’s an AMAZING story and just the kind of story I hope to write when I grow up.